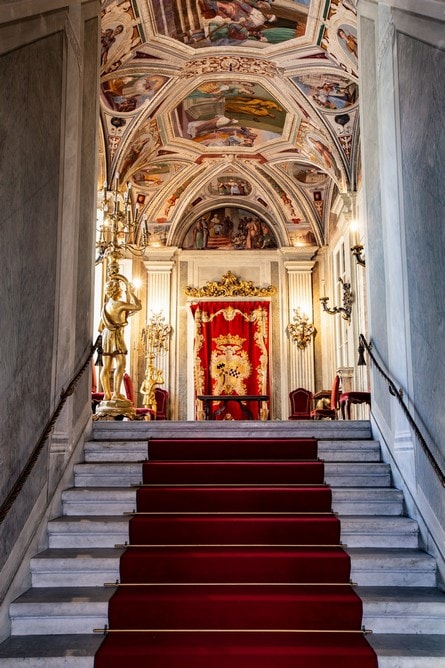 The second noble floor, inhabited in the first phase by Paolo Battista Interiano, has a similar structure from an architectural point of view. Also in this case, in fact, the floor opens with a beautiful loggia which is restructured with two octagonal panels on the vault, frescoed by the Calvi.

In this case the protagonist is the son and successor of David, Solomon, represented in the moment of the meeting with the queen of Sheba and in the adoration of the idols.

Around it are described other episodes from the king’s life and four other allegorical figures: Sculpture, Eloquence, Astronomy and Painting. However, the second octagon and the figures of Astronomy and Painting can be attributed to the hand of another artist, Giovan Battista Carlone, who was probably called by the Centurione family to repair damage to the previous paintings from the end of the sixteenth century.

From the loggia you then enter the wonderful hall, the real center of the building. Of the original fresco decoration, only the large central panel dedicated to the Battle between Constantine and Maxentius is conserved today, which concludes the fresco cycles dedicated to the affirmation of the Christian faith which was originally to be the leitmotiv of the entire cycle of the wall .

The scene recounts the famous clash already described by Piero della Francesca in the frescoes of the Stories of the True Cross in the main chapel of the Basilica of San Francesco in Arezzo and refers to one of the most important events in the history of Christianity. During the period of the Tetrarchy, according to the will of the emperors Diocletian and Maximian, the son of the second, Maxentius, and his brother-in-law Constantine should have taken over as caesars of Constantius and Galerius. However, while Constantine was recognized as emperor after several vicissitudes, Maxentius forcibly proclaimed himself going to antagonize Constantine himself. Influenced by the senate, after having assembled a large army, Constantine therefore decided to attack the self-proclaimed emperor and definitively defeated him on the Milvian Bridge, entering Rome as the only true emperor and subsequently favoring his religion, Christianity, promulgating with the Edict of Milan in 313 freedom of worship in the Roman Empire.

The scene is composed in a compact manner, with Constantine’s army on the left advancing decisively and victorious behind the emperor. The soldiers are represented mostly on horseback, tightly grouped in a tangle from which the sumptuous helmet crests and a forest of spears and colored flags emerge. The charge is vigorous and Maxentius’ men can do nothing but retreat. 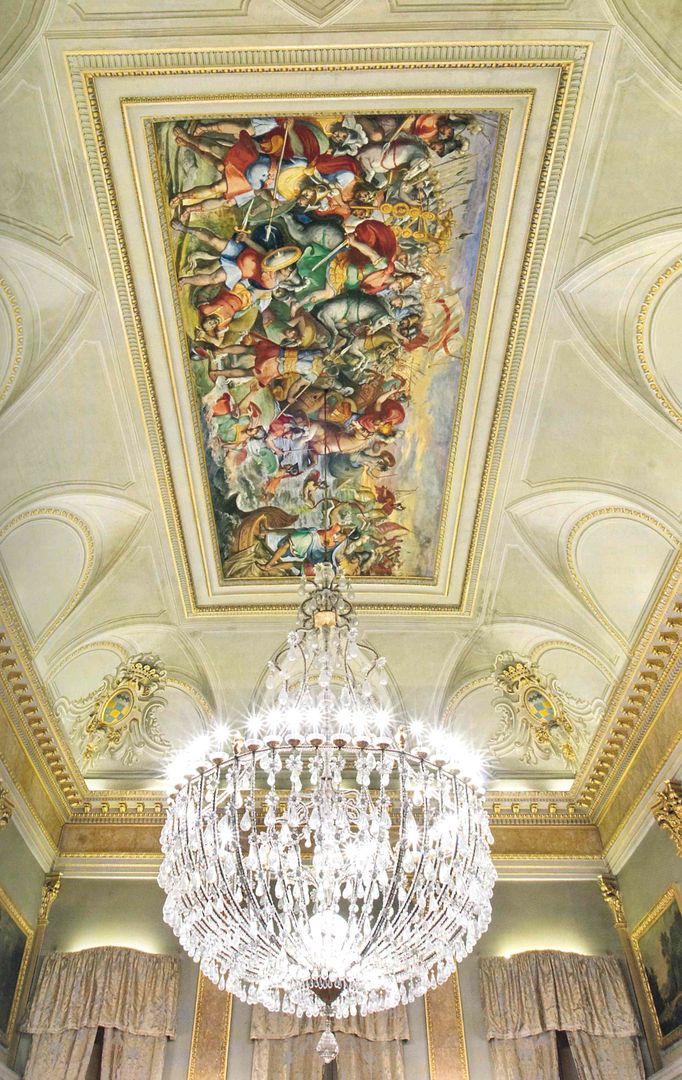 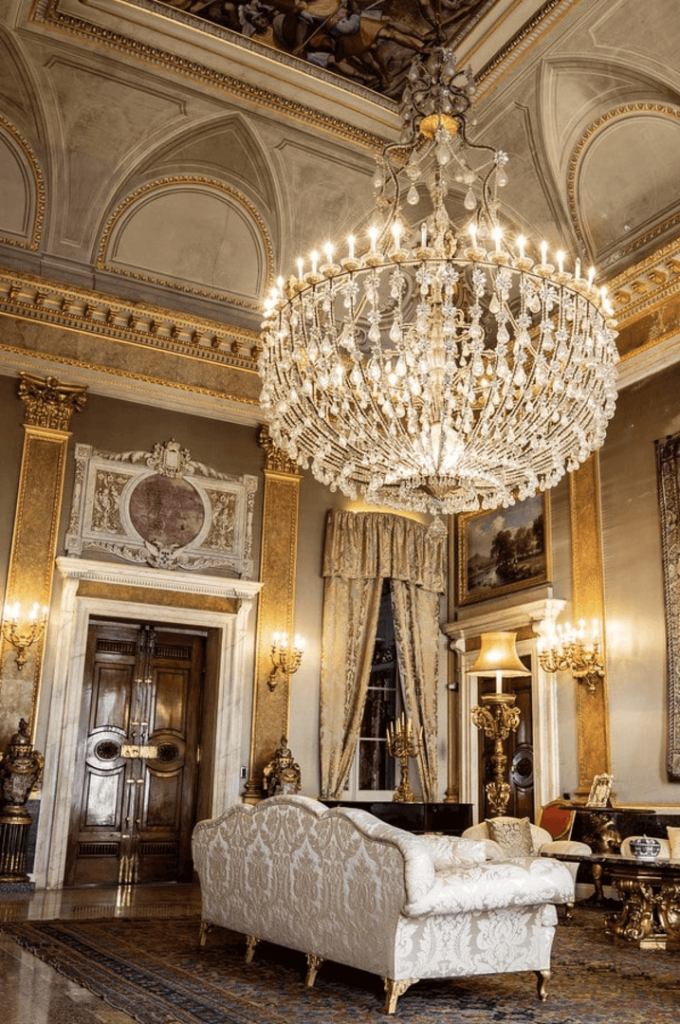 Pantaleo Calvi builds the scene again taking up the stylistic features of Luca Cambiaso thus going to represent the battle scene in a harmonious way, testifying to an advanced technique based on the research of perspective and on the importance of the preparatory drawing. Moreover, Pantaleo is, together with Lazzaro, the stylistically most evolved painter of the Calvi workshop, the family of artists who, together with that of the Seminos, receive most of the pictorial commissions in Genoa at the end of the century. XVI.

But the decoration of the vault is not the only artistic element present in the great hall. In fact, on the side walls there are two splendid Flemish tapestries dating back to the mid-sixteenth century and depicting the months of September and October. The two decorations originally belonged to Andrea Doria and are part of a larger cycle that was dismembered in the 19th century, but of which various pieces still exist, three of which still belong to the Doria Pamphilj family. Also worth mentioning are the two beautiful wooden statues depicting Glory and Truth and signed by the most important Ligurian sculptor on wood of the Genoese eighteenth century: Anton Maria Maragliano. Once finished with a white marmorino coloring, to delude the spectator that they were works in marble, they were then gilded during the nineteenth century, when they came into this collection from the Imperial Sauli De Mari palace in Campetto.

The salon has always had a representative function. Guests of the Republic of Genoa were welcomed here and the most important parties organized first by the Vivaldi Pasqua and then by the Pallavicino were held here, as evidenced by the inscription above the entrance portal which describes the ball held on 13 September 1892 in honor of the Italian royal family visiting Genoa for the celebrations of the fourth centenary of the discovery of America.

The dining room has on the vault yet another fresco decoration created during the sixteenth century by the Calvi family.

And once again the theme of the paintings is to allegorically celebrate a virtue, that of continence. The subject of the central panel is in fact Scipio returning the gifts and his fiancée to Allucio, an episode that took place at the end of the conquest of Cartagena in Spain, when the Roman leader refused the gifts received as a war victor, returning the conquered prizes to the vanquished, and thus showing the dowry of clemency that allowed him to receive the respect of the newly subdued peoples. The central panel is only the last scene of the cycle which presents on the sides all the various operations of the conquest of Cartagena, from the siege, to the battle, to the definitive submission of the city.

The Calvi frescoes, still excellently preserved, are inserted within a score created in 1932 by Luigi Gerolamo Leggero where the fake frames are made following a model of ancient taste, where the coats of arms of the Pallavicino family and the Corsi family stand out, they had had a union in the figure of the Marquise Teresa Corsi Pallavicino during the nineteenth century. 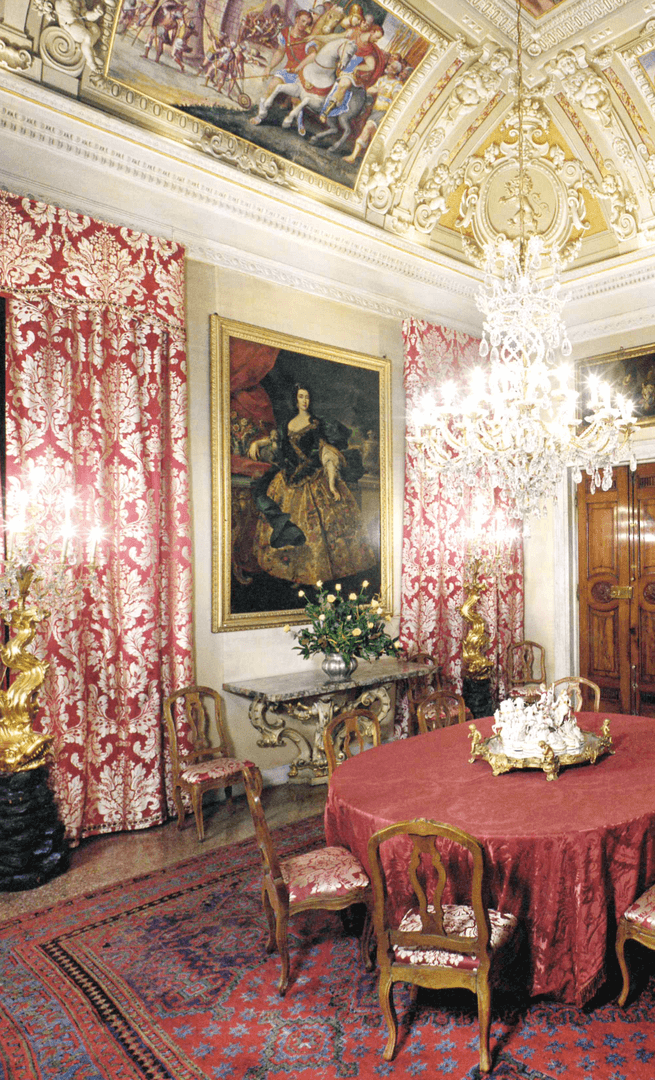 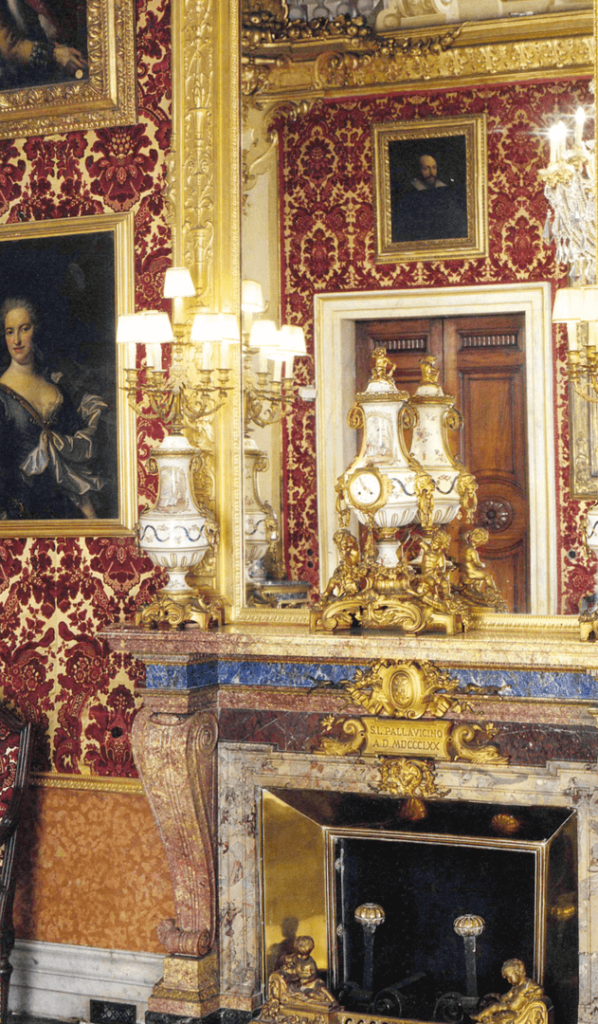 A particular environment on the second noble floor of the building is that of the Salotto dei Lapislazzuli, so defined due to the presence of the precious stone inside the large wall table, the three corner shelves and the marble fireplace in the room.

These furnishings were designed at the end of the 19th century by Annibale Angelini, who is also the artist who decorates the vault representing the Liberal Arts and framed in stuccos that serve to simulate a late Baroque construction that evokes the Genoese pictorial tradition.

The room is also the first room of the building which houses the important Pallavicino picture gallery, witnessed here in particular by two large sixteenth-century genre scenes by Frans Snyders. The decoration of the living room is completed by eighteenth- and nineteenth-century European and oriental porcelain.

Not foreseen in the initial architectural project of the building identified in the plans by Rubens, the gallery probably dates back to the beginning of the eighteenth century, when the fashion for creating these luxurious rooms on the model of the Hall of Mirrors in the Palace of Versailles exploded in Europe.

Although originally frescoed, today the gallery has its Neo-Renaissance appearance designed by Angelini, on which Luigi Gerolamo Leggero at the beginning of the 20th century inserted a fake architectural perspective in the late Baroque style that recalls the technique used by quadraturist painters.

In addition to fine furniture and porcelain located on the sides of the room, the gallery also contains important paintings on canvas on the walls created by artists such as Nicolas Maes and Domenico Fiasella, author of the beautiful Nativity. But the main artistic element of the room is probably the wooden statue of Filippo Parodi representing Jupiter. 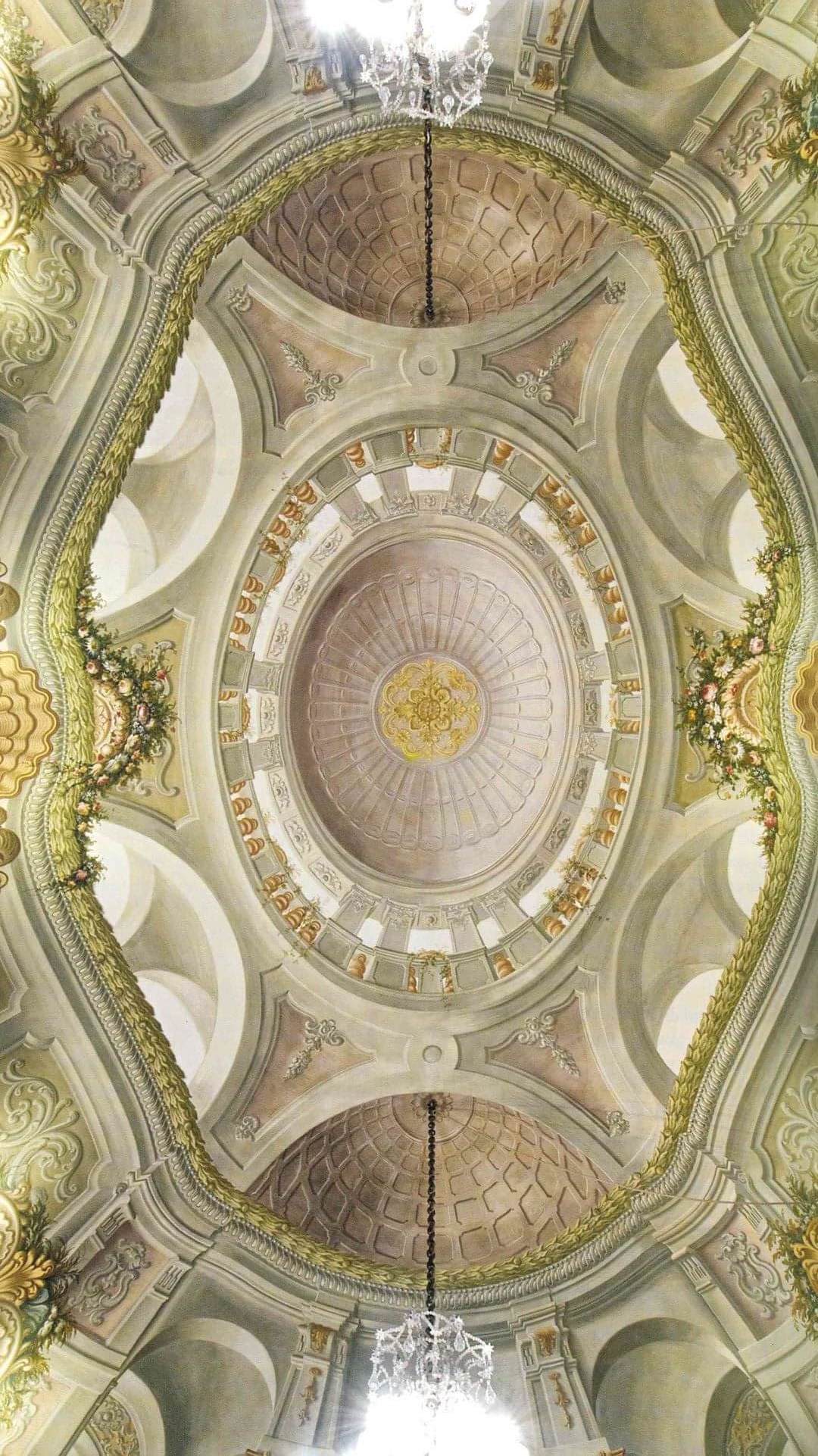 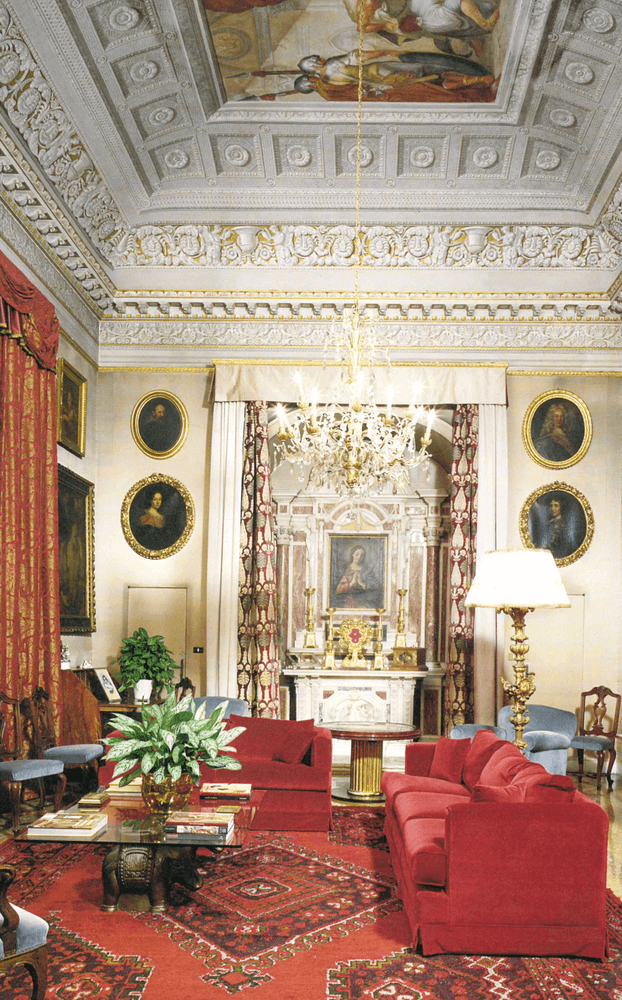 External to the main body of the sixteenth-century building, the Salotto della Cappella is characterized by a pictorial decoration created in the early nineteenth century, in the period in which the palace was owned by Duke Pietro Vivaldi Pasqua, by Filippo Alessio and inserted within a with fake chests of drawers created by Michele Canzio.

The environment is thus defined because of the chapel on the rear wall behind the beautiful eighteenth-century curtain of Turkish manufacture and characterized by the sculptural decorations in relief by one of the main artists active in Genoa in the Neoclassicism period such as Nicolò Traverso, who here depicts some Stories of the Virgin, including the Annunciation, the Marriage and the Presentation in the Temple.

However, the room turns out to be particularly important above all for hosting one of the main pictorial works conserved in the building: the painting depicting Giuseppe Explains his dreams, by Bernardo Strozzi.

This canvas of extraordinary vitality highlights all the stylistic ability of an artist capable of revolutionizing Genoese Baroque painting with his ability to create plays of light and innovative chromatic effects. Probably created during his activity in Venice, the work is among the most successful of the Cappuccino who manages to best interpret the allegorical meaning of the subject. But Strozzi’s work is not the only noteworthy work in the living room, which also contains two sixteenth-century tables by Agostino Calvi and a beautiful canvas by Luca Giordano depicting the Dream of St. Joseph.

On the side of the building adjacent to Palazzo Ayrolo Negrone is this particular living room decorated with yellow silk tapestry and 19th-century wall paintings by Francesco Gandolfi, Giovanni Quinzio and Federico Guidobono.

But what stands out inside the room is above all the picture gallery which presents masterpieces such as Rebecca and Eleazar by Gregorio de Ferrari as well as the four Stories of the prodigal son by the Flemish painter Cornelis de Wael.

The same picture gallery continues in the adjoining living room, nicknamed Salotto Rosso again due to the color of the upholstery, which presents on the walls portraits of the Genoese painter Anton Maria Vassallo and the brilliant eighteenth-century Austrian artist Anton Von Maron.